If You Don't Exactly Hear, You May Be Exactly Screwed 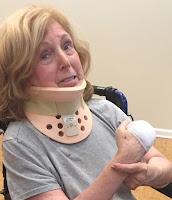 So this is what happened two days ago. I went to the market with my aide and (I approved) her two-year-old, adorable, blue-eyed Sophie because Katie, her mother, didn't have a babysitter. We don't go shopping when she rarely brings Sophie, but she is so behaved, a problem was the furthest thing from my mind.

Sophie walked (let me be clear--WALKED) around the gargantuan Giant Eagle supermarket. We got the needed items, hung the bags on the back of the wheelchair with me in it, and Sophie started to rub her eyes, a sure sign that she would take a nap once she returned to the car.

We left the store and arrived at the car, and Katie said, as she always says, "Don't get up from the wheelchair. The bags are heavy and I have to remove them first." And then added, for a first time, "I'm going to put Sophie in her car seat before I take the bags off the wheelchair."

The parking lot was a noisy one, plus an anxious driver with a muffler issue stopped a few feet away to get the spot Katie would soon vacate. Katie opened the trunk, and then went around to the other side of the car to place Sophie in her car seat. (See the problem yet?)

I didn't accurately hear those instructions. I heard Katie speak, but the words were indistinct, just like the adults in a Peanuts movie. (Wah wah wah). The trunk was open and I was texting on my phone, so I figured, albeit erroneously, that the bags were already in the trunk, and I stood up. As I arose, the wheelchair went flying backwards from the heavy bags and I went along with it, landing on my right side and hitting my arm, neck, and head on the blacktop. When I stood up, assisted by a stranger and Katie (the crowd, fifteen strong, had gathered), I saw the blood on my hand and realized I was cut and my finger was out of the joint.

It wasn't Sophie's fault. It wasn't Katie's fault. It was my fault. The hearing aid had diminished slowly over time, and I was trying to stretch out the shelf life to get a new one in Portland. (If you follow the blog, you know that I'm moving there). 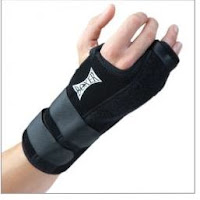 The rest is all a blur. I went to the Emergency Room and the nurse put on that neck brace pictured above, just in case I had injured my spine and head. I was tested via CT scan and the results were negative. But the X-ray showed a fracture in my finger. The doctor said I should follow up with an orthopedic surgeon (I went and a splint was put on my hand, just days away from the Portland trip).

So, all of this is to say, yeah, hearing is an issue and not one of the usual top five reasons that a person gets injured in and around the home. Slips and falls, often-silent choking, adverse effects of medication, hazardous fire, and severe cuts are the ones most "perennially" written about. But hearing is on my list.

If you can't hear accurately, let's say, the fire alarm or a siren or the alarm clock or, in my case, instructions, then bad things might happen. Very. Bad. Things. Is your hearing ok? If you have doubts, I suggest you get a hearing test from an audiologist and maybe you'll be surprised at the results.
Posted by Joyce Hoffman at 3:36 PM 2 comments:
Email ThisBlogThis!Share to TwitterShare to FacebookShare to Pinterest

Want to Join a Class Action Lawsuit about Faulty IVC Filters? Kirkendall Dwyer is Handling Them.

In America, litigation rules. Some people sue frivolously, like a woman who was burnt by McDonald's coffee that was too darn hot (she won) or a man who sued a beach-front hotel after he was knocked over by a wave (he lost). But the majority of the lawsuits are worthwhile and about personal injury. Take my IVC (inferior vena cava) filter which came from my DVT (deep vein thombosis), for example. But first, a little background.

Two weeks before I had my stroke on that fateful day, April 8, 2009, I called my friend, an orthopedic surgeon, to ask about my foot and leg pain.

"If your pain continues, and it goes up to your knee, and even higher, go to the Emergency Room," he said.

The pain was going strong, and before it got up to my knee, I went to the ER. The ER doctor did some blood tests and an ultrasound, and he came back with the results.

"You have blood clots in both legs. I'm going to have to admit you." I was in New Jersey at that time.

All right, I said to my inner psyche, don't panic. The blood clots don't mean a thing. I took the day off from work. [I found out for sure 3 years later that Avelox, an antibiotic known as the family of  fluoroquinolones, could produce blood clots]. I was in the hospital for a few days and went back to the law firm, Cozen O'Connor in Philadelphia, where I was a Sr. Technical Trainer. The following week, I went to a hematologist in Philadelphia and he discovered my platelets were practically non-existent. But the trouble was nobody connected the dots. The doctors operated in a void. 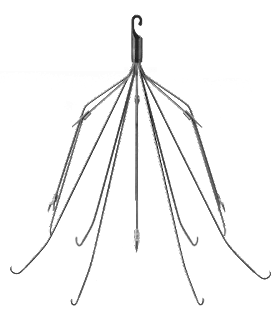 When I had the stroke, though I was unconscious, it was told to me later by my son that I had blood clots in every extremity (arms and legs). So the doctor at Capital Health located in Trenton, NJ, put a Greenfield filter in my groin [there are many kinds of filters that all do the same thing] to catch the clots from going up to my lungs, heart, and brain. Resembling a windblown, useless umbrella, this is what it looks like. (Greenfield filters were recalled in 2005. A Greenfield filter was implanted in me in 2009. Was the defect solved? I don't know, and that right there is an issue, too).

I was unconscious for 8 days, and when I awoke, my sons, the youngest playing the guitar at my bedside, and my partner (whom I left after 17 years, but that is another story for another time) were waiting. It's all in the book. (The Tales of a Stroke Patient by yours truly, available at Amazon -- https://www.amazon.com/Tales-Stroke-Patient-Joyce-Hoffman/dp/1479712493/ref=sr_1_1?ie=UTF8&qid=1475474432&sr=8-1&keywords=the+tales+of+a+stroke+patient)

Anyway, now 8 years later, I joined a class action lawsuit a few years ago sponsored by Kirkendall Dwyer. The reason I joined the suit was I read a lot of cases where the filters moved and it got me antsy. I received a letter from Kirkendall Dwyer in November 2016 and here is what it said:

As you recall, Kirkendall Dwyer LLP represents you in a lawsuit related to your IVC Filter device. I am writing to inform you that we received the medical records in your case. They show that on 04/08/2009, you were implanted with the VENA TECH manufactured by BBRAUN. We are pursuing a claim related to that product.

It is very important that we have a current treatment history. Please let us know if a have had any of the following Injuries after the IVC Filter placement. [I had a pulmonary embolism, #4 on Rafael's list, a couple of years ago]

If you continue to have problems associated with the IVC Filter, then please schedule an appointment as soon as possible to have your problems evaluated. During your appointment, please be thorough in explaining your complications.

If you have any questions, then please do not hesitate to call the office.

Since I couldn't travel to Kirkendall Dwyer which is in Houston and Dallas, TX, Rafael kept in touch with me by phone. Then last Friday, I received a letter that was a report from the radiologist who was hired by the lawyer as an expert that said there was a perforation in my inferior vena cava [#1 on Rafael's list]. So I stopped doing the stationary bike until I saw a vascular surgeon who specializes, in part, in the treatment of disorders of the vascular systems, that is the body's arteries and veins. 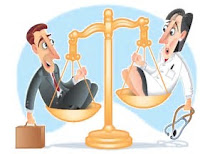 I saw the surgeon three days later and I showed him the letter from Rafael and the report from the attorney's expert radiologist that said, in essence, my vein had been perforated by the filter and that warned the surgeon that an operation to remove the filter was needless.

"Forget that you have it," said the surgeon. "The filter is supposed to be permanent and there is no way to remove it because the filter and your vein are one." Then he pointed to the letter and showed me where the radiologist referred to my filter and my vein as occluded (dictionary definition says "taken into and retained in another substance." That's where filter and vein are one come into play.

"You may die on the operating table. Besides, 89% of the people have perforated veins from the filters." His eyes kept darting back to the lawyer's letter.

I believe the lawyer's letter and the radiologist's report are what colored the surgeon's thinking. Doctors hate lawyers' letters.

A few medical professionals in Pittsburgh know about the lawsuit. Word travels fast in the Steel City. But I'm going out to Portland, OR, next month to live near one of my sons. I'll see a doctor in Portland, or Puddleton as it's sometimes called [all that rain--get it?], without mentioning the lawyer. That way, I'll get a straight answer. Word of mouth will probably die when it crosses the Rockies.

So call Kirkendall Dwyer if you have experienced any of the items on Rafael's list. What do you have to lose? I'll answer that. Nothing!

(RETRACTION: The attorney's aide of Kirkendall Dwyer called me last night to tell me he appreciated the post, but the filter was a BBraun, not a Greenfield. He said they don't handle Greenfield filter cases because they don't cause that many problems. However, the BBraun is right up there causing problems as stated in Rafael's list above. Even though the filters do the same thing--catch blood clots, my error came about because that filter information is the only thing I was told from the start of the stroke. So Greenfield filter, thumbs up; BBraun filter, thumbs down).
Posted by Joyce Hoffman at 2:16 PM 4 comments:
Email ThisBlogThis!Share to TwitterShare to FacebookShare to Pinterest
Newer Posts Older Posts Home
Subscribe to: Posts (Atom)