To Boldly Go Where No Insect Has Gone Before: Fuckin’ Fungus Gnats

The first part of the title is self-explanatory, but the altered line from one of the most extraordinary shows, Star Trek, requires some explanation. So keep reading. Once you're done, you'll understand. Now, on with the story.

I had a stroke. No revelations there. And as such, I cannot get out whenever I feel like it to buy things, more specifically plants. So I ordered live plants from Amazon, and that's when it started--tiny, annoying, fuckin' (yes, the profanity is necessary) fungus gnats. First, some background. 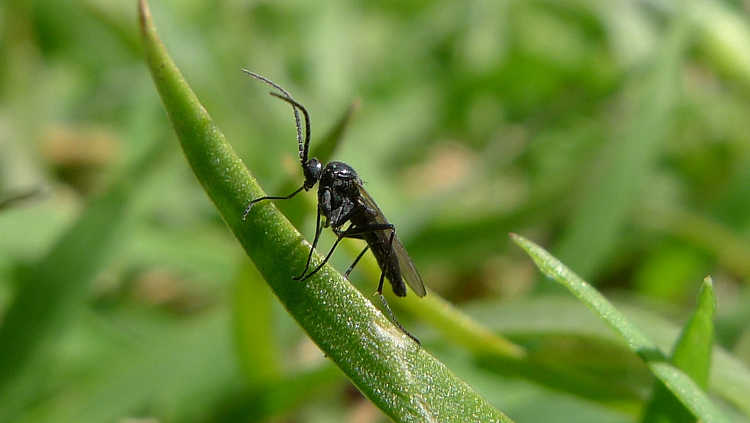 The adult fungus gnat can lay about three hundred eggs in its short lifespan, about two weeks, unless you're lucky enough to smash one. (PETA people, forget it. Even you would find them annoying). Eggs are laid in fertile, moist soil at the base of plants and turn into larvae, rapidly increasing in size as they munch through organic matter in soil.

If you overwater the plants, too much wetness will propel the development of fungus gnats and the roots will begin to rot, making the ideal meal that fungus gnats love. In addition, you might find the fungus gnats enjoying the plants themselves if there's not any organic matter (dead, decomposed worms, for example) left.
A root drench with one part hydrogen peroxide and four parts water (you have to wait until the mixture runs all the way through the plant and out the drainage hole) is best rather than spraying the plants with insecticide because it rids the problem. You'll have to put up with the gnats for two weeks longer if they've already hatched.
Two weeks ago, there was an infestation before I read about the hydrogen peroxide mixture. So the African Violets and the poinsettia plants, which are very susceptible to fungus gnat damage, didn't succeed. But so far, the other plants came through the process.

And now, To Boldly Go Where No Insect Has Gone Before, will be revealed.

I have sinusitis and use a nasal rinse (which is disgusting in itself and I lock the door by habit, even if I'm alone, to not let anybody observe), and at the start of the infestation, I noticed fungus gnats were coming out of my nose in hordes. The more I used the rinse, the more I saw the fungus gnats emerge, nasally speaking. Unbeknownst to me, and definitely the fungus gnats, I was inhaling the gnats (I'm going to get dramatic here) with every breath I took.

So for a week thereafter, I wore a surgical mask 24/7 to keep the fungus gnats from being sucked up into my nose. But I have a few more orifices, like my ears and eyes, for example, and I used appropriate rinses in them, too.

But Andy and Laura, my son and his girlfriend, bought me a Venus Fly Trap for the remaining gnats, that really does what it says. Look carefully. The picture says it all. 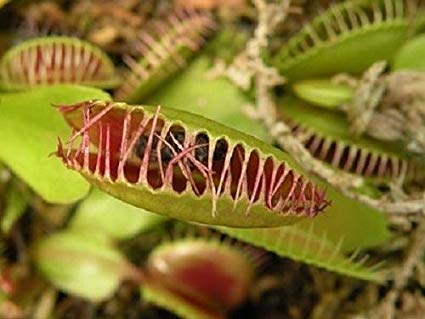 Posted by Joyce Hoffman at 5:13 PM 4 comments:
Email ThisBlogThis!Share to TwitterShare to FacebookShare to Pinterest

An Article and a Presentation: Long-term Care and a Stroke Video Project

I know, I know. Insurance companies have a dismal reputation because most of them deserve it. They talk insurance speak--of deductibles, annuities, disability income, expense ratio, hospital indemnity coverage--as if everyone is supposed to understand. And the acronyms the insurance companies use will drive you "mad."

So listen up, family and friends: If you already had a stroke, it's too late to buy Long-term Care insurance, but if you're healthy, you can't make a better investment. That's why I'm guest hosting, albeit and thankfully dummied down, an article by Hazel Bridges that I think is worthy of attention. The author's views are her own. Here it is, from AgingWellness.org:

Every American who reaches age 65 qualifies for Medicare. You can rest assured knowing that your or your loved one’s medical needs will be covered by this government-subsidized health care program. What you might not realize is that Medicare doesn’t cover every need for seniors.

Long-term care (LTC) is especially important to understand because many seniors need this later in life for several years at a time and not everyone plans for it. Long-term care usually refers to custodial care, which is help with daily living. This includes activities such as getting dressed, eating, getting around the house and medication assistance. Since most of these needs are not medical, Medicare generally doesn’t pay for it.

Long-term care can take shape as home care by a skilled nurse or home caregiver without medical training, but it can also involve long-term stays at facilities. Some seniors prefer (and are able to) remain at home with help, but other seniors either don’t have long-term living arrangements or are unable to live outside of a facility that can provide 24/7 care. This is where assisted living facilities and nursing homes come in.

Medicare only covers long-term care under certain circumstances. Skilled nursing care has to be short-term (100 days or less), preceded by a hospital stay, and as recovery from an illness or injury that’s not from a chronic condition. There’s also a helpful program called Medigap, which is an insurance supplement from private insurance companies to cover the gap that Medicare doesn’t cover.

Unless you’ve thought about your retirement years in advance and have all your ducks in a row, you might find yourself struggling to cover the costs of long-term care. Perhaps you’re a junior who is taking care of an aging family member who needs long-term care, and you don’t know what your options are. Or, maybe you’re simply looking into a plan for your own future LTC needs.

Whatever your intention and needs are, you can plan ahead for LTC. If you’ve already reached that point, you can find ways to subsidize the cost with your current income and assets. The most direct choice is long-term care insurance, which does exactly what it says: pays for long-term care. These policies are typically taken out after age 50, years before the service is needed. A healthy 60-year-old can also take out a policy, but your premium rises as you get older or have a condition that could require LTC later down the road.

If cash is needed to help pay for long-term care, one popular option is a reverse mortgage. In a reverse mortgage loan, homeowners can convert the equity in their homes into cash. The lender makes tax-free payments to the borrower since it’s a loan advance rather than a form of income. Just be careful to weigh the pros and cons of this decision.

You may have a long future ahead of you, or you might find yourself trying to make ends meet for yourself or a loved one. Whatever your situation, make sure you understand what your insurance policies cover, how Medicare can help you and how your assets can be converted to cash. You have one life, and you should take care of it as best you can.

Congrats, Hazel, for this informative article.

And I received this stunning email from Maggie Whittum:

Hello Joyce, my name is Maggie and I'm a stroke survivor and filmmaker. I had a massive stroke at age 33, leaving me disabled. I'm hoping to do something good with my shattered life.

I wanted to tell you about this documentary film project of mine.
Please check out this two-minute teaser.

I'm trying to convey to people what my life is like with
pain/disability/a shattered sense of identity.

It's a documentary film on stroke, disability, loss,
resilience, and the healing power of art. It’s for
stroke survivors, and people who struggle with
chronic illness or chronic pain.
If you would like to share it with others, please do.

Thanks for all that you do!
Maggie

Wow! A filmmaker and a stroke survivor, attempting to
make a difference from her shattered life. Kudos, Maggie,
for an ongoing project very well done! Best wishes!

You can leave comments below for Hazel and Maggie.
I'll pass them on.
Posted by Joyce Hoffman at 3:01 PM No comments:
Email ThisBlogThis!Share to TwitterShare to FacebookShare to Pinterest
Newer Posts Older Posts Home
Subscribe to: Posts (Atom)