In the Hapless Wheelchair: Talk To Me When You're Talking To Me! 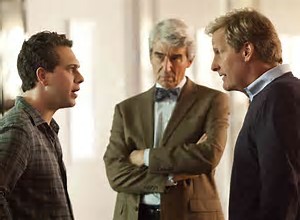 It was a recent HBO limited series called The Newsroom. Starring Jeff Daniels as Will McAvoy, a cantankerous insomniac and often narcissistic news anchor, he became involved in a scuffle with the producer (Thomas Sadowski) who calls Will a scumbag (not exactly his words--worse even), but the producer addressed Charlie Skinner (Sam Waterston), the news director, instead of Will, and Charlie said, "Talk to him when you're talking to him."


You got all that? It's very important that you do because of the next part of my story. If not, re-read.

So this is what happened yesterday, but it's sort of the same story that happens every time since I had the stroke. Sitting in the wheelchair doesn't help, but for long trips like Walmart or the supermarket, it's a necessity. A man or woman addresses my Personal Assistant, who travels with me because I am disabled and cannot drive. But this crystal clear-thinking woman--me--is ignored. Somehow, I become invisible, a ghost, or I am addressed in the third party.

The woman in Kohl's says, "What is it she's looking for?"

The man in Dollar Tree says, "Does she want red or blue?"

The teenager at the check-out window in Dunkin' Donuts says, "Should I make her tea iced or hot?"

Ultimately, I got tired of the ghost role and this is how I empowered myself to do something. Big time.

I was in the Department of Motor Vehicles to inquire about the status of my identification card, aka my non-driver driver's license, which never arrived in the mail. We went up to the window and, because I was sitting in the wheelchair, my PA, who was eye level with the representative, asked about its whereabouts. The line behind us was extensive.

"I don't know. Let me check. Do you know when she applied?" asked the man.

"Three weeks ago," my PA said.

"Oh. Here it is. There was some quirk in the system and it wasn't sent out. Let me try again. Here's an Oregon certificate of residency [which I didn't have anymore] that should help her out if she's needing it. But she shouldn't. You're her driver, aren't you? And she's not going out of the country," he chuckled.

That was it. The crushing chuckle, bordering on guffaw. With the seemingly endless line in back of us, and with the wheelchair locked, I stood up straight at my full 5', 5", tired of being a ghost any longer. I turned a bit to broadcast the message.

"As a matter of fact, I am going out of the country," I lied and shouted with unabashed glee. "I'm the Goodwill Ambassador for Russian Diplomatic Affairs, appointed by the president himself. I'm leaving Friday," I said, taking the first country that came in my mind a la Trump and the title I made up as I went along, leaving the first 10 people behind me looking with a newfound admiration.

I added, "And by the way, talk to me when you're talking to me."

I sat down in the still-locked wheelchair, looking serious as ever. She unlocked my brakes and we turned and left. I was proud of my exuberant bullshit, even prouder that I advocated for myself. I willing to say that man learned a lesson. But then again, maybe not. Either way, I was overjoyed at my newfound readiness for extemporaneous speech which I didn't have ever after my stroke.
Posted by Joyce Hoffman at 1:00 PM 3 comments:
Email ThisBlogThis!Share to TwitterShare to FacebookShare to Pinterest

Hey, Hospital Administrators: Be the First to Revolutionize the Healthcare System for Stroke Survivors

I have thoughts, good ones at that, even though I had a hemorrhagic stroke and a portion of my brain cells died, never to appear again. That's all right. I compensate with little tricks that make me able to pretend I have the brain I was born with.

But just talk, no action has been the status quo with stroke survivors, even though they contribute to one of the most disabling conditions. So I'm going to dare hospitals to do this because no hospital has done it before--revolutionize healthcare for stroke survivors.


Greetings and with all due respect to hospital administrators. You have a difficult job, keeping the balance between doctors and nurses (some of whom are un-balanced) and the rest of the staff running smoothly, or just running. You aren't afraid of suggestions, are you? Well, then, use your smiling (albeit even if you don't feel like it) visages to approach this thought.

Your facility could be "on the map" even more than it currently is. Be the hospital that stands out from the rest if you follow this one revolutionary suggestion for stroke survivors.


Before I tell you what "it" is, don't tell me you can't afford it because, truth be told, it's the missing piece. Doctors and RNs and the rest of the staff don't need perks, like the spreads you lay out for them, to keep them loyal. Just saving on food alone could make this idea more of a reality. If they really want to help people, and I'm sure most of them do, they'll stay put in your hospital. And your salary more than justifies my proposal. Ready?

When a stroke patient is admitted, have a psych team at the ready as soon as the patient is awake and comprehending, who reads the survivor some strict rules every day for at least a week BEFORE therapy starts. Crying will most likely happen. And that's all right. Emotional release.

Let me give you background on this thought because I've been thinking about it ever since I had my stroke eight and a half years ago.

I was depressed (it went on for a year, less and less after that) and thus, at times, I was non-compliant. I was in a coma for 8 days and didn't talk for 5 weeks. And that was the easy part. What's the tough part, you ask? From the time I started talking, I would always ask questions at Bacharach Rehabilitation in Pomona, NJ, questions that could have been answered by the not-yet-formed psych team before I started therapy.

A psych team. For at least a week. Every day. Before therapy starts. To get stroke survivors ready to bust their asses and cooperate with the staff. Who's ready? Anyone? Anyone? Contact me through email and I'll go anywhere in the continental US to make this happen.